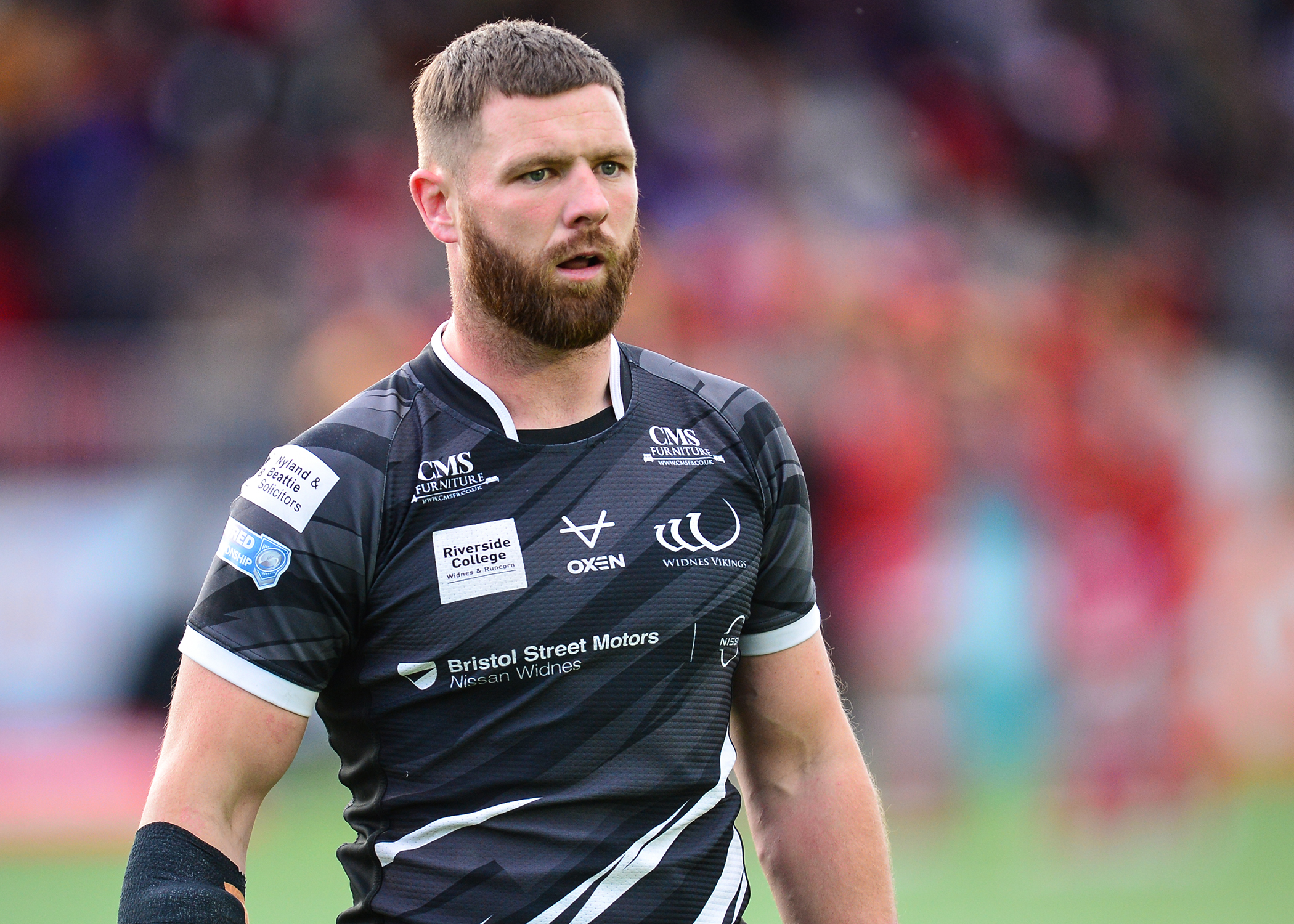 Readers of our We Are Widnes magazine will have had the early scoop on Widnes Vikings centre Ste Tyrer’s latest chat with us, but here’s a chance to catch up on what was said on Ste’s journey in the sport so far.

“My uncles started taking me to rugby as a treat. I remember my first game, it was St Helens v Workington.

“I played football mainly, I didn’t really start rugby until a bit later on. I was just obsessed with going to watch the rugby at Knowsley Road.

Ste didn’t get into playing rugby until he went to secondary school at Cowley. “At Cowley, they were mad on rugby. Because I was alright at it, I ended up in the team. I was doing that alongside playing football, and then just fancied the change.”

13-year-old back-rower at the time, Ste Tyrer, caught the eye of the club he had been going to watch since he was a young child while playing school rugby. “I was a bit of a late starter. The Saints scholarship set-up used to watch Cowley. They’d watched me, and had a word to say that if I wanted to come and get a scholarship, I needed to play for a community club. I went to my local one which was Blackbrook Royals, and then Saints took me in. One of the academy coaches at St Helens at time, Eric Frodsham, moved me to centre because believe it or not, I was fast then!”

“By the time I was 16, I’d signed a professional contract. I was training full time with the likes of Keiron Cunningham, Paul Wellens, Sean Long, these blokes who I’ve watched as a kid, now training with them. It just happened so fast. I got my debut at Saints at 17. When I look back, it probably happened a bit too fast, but I’ve no regrets.”

“I made my TV debut against Bradford, and they had Lesley Vainikolo on the wing, who I’d watched since being a kid, an absolute monster of the game. I made a break and went full-length, and he was the bloke chasing me! It was unbelievable, I was thinking, ‘Vainikolo’s chasing me, I better get there!’. Thankfully I got to the line and scored, he didn’t catch me, I was pretty fast back then!”

Several loan spells from St Helens followed for Ste, the first of which was here at Widnes back in 2008, when he scored seven tries in ten appearances for the Vikings. “I was only here for about two months, but I absolutely loved it. Steve McCormack was the coach then, and we had Nike training gear and all kinds which is something you don’t get very often in rugby league! I wanted to stay again the year after, but Saints didn’t want me to do it again because I’d already done it.”

A loan spell at Celtic Crusaders followed, but Ste found himself injured for much of his time there before returning to a different set-up at Saints to what he remembered. “A lot had changed. The head coach had changed a couple of times and I knew I was basically surplus there. I went to Salford and loved it, played pretty much every game in Super League that year, and then as that came to an end, I had the chance to stay there but Widnes came calling! I liked playing at Widnes the last time so I came back here! I had a really good year, but for one reason or another it didn’t happen for me but I never had any sour grapes about that.”

After hearing that he would be leaving Widnes, Ste had a call from Halifax. Over eight years with the Panthers, he managed to score an incredible 2,000 points for the club. “I’ve got nothing but love for the place, always will have. Once I’d left Widnes, I never thought about Super League again really. I just focused on enjoying what I was doing. I kind of just fell in love being there. To travel there from where I was living four times a week, there and back, you had to love it, and I did. I’ve got memories for life there.”

Ste had settled in Widnes, and stayed living here for those eight years while he played at Halifax, but the trips there and back for much of the week didn’t bother him. “I was lucky really, because I only ever did one year where I was on my own, I always had a good group of lads. I had three years with Shane (Grady) which was probably my favourite three years, Shane’s one of my best friends now.”

After those eight years at The Shay, and it was time to come back to Widnes. “I’d gone into the 2020 season with Halifax just not quite feeling myself. I just didn’t quite feel right there. During Covid, I’d been in touch with Shane, Danny Craven and Matty Smith and they talked about this place, I knew what it was like already. I always had it in the back of my mind but I’d been at Halifax that long, I was going for records there. Ultimately when it came down to it, I don’t think you can put any records or anything like that before your own happiness and I just felt like it was the right time to do it. It was a strange time to do it, because I didn’t get to say goodbye or anything to the club that had treated me so well, supporters that had looked after me so much, but I just felt for me that it was the best thing to do at the time.”

Tyrer returned to Widnes as Covid was ongoing, so although he was familiar with the settings, it was in strange circumstances at first. “Getting tested three times a week with only so many people allowed in the gym at one time, we couldn’t do contact, it was all a bit strange, so I didn’t really settle back in here for a while, it was all a bit alien but that’s what those times were about and that’s what everyone was going through. As soon as we got back playing though, it just felt like home again.”

“I enjoyed last year a lot. I thought I played some of the best stuff I’ve ever played. We had some good moments with the team, just not enough. We were let down with injuries and players who couldn’t play for whatever reason, and it was what it was, but from a personal point of view I strangely enjoyed the year. I know it’s not where I’m born but with Widnes being my hometown, where I live now, that always gives you a bit more when you’re playing. It’s always a bit more in the back of your mind when it’s where you live, so to be back here was great. We didn’t set achieve what we set out to achieve, but ultimately, I did enjoy the year.”

Although born and raised in St Helens, Ste sees Widnes as his home town now. “I’ve lived here since 2010, I’ve been here a long time. It isn’t actually my home town, but I’ve spent over a third of my life here, my kids are born and raised here, so it effectively is my home town. It just means a bit more.”

After a fantastic start to the season, Ste talks about why the team tailed off but how they can use those tough times moving forward. “Pre-season was as good as I’ve ever seen. Obviously I didn’t take part in it because of my shoulder operation but the team went into the season absolutely flying. I just think a couple of the losses knocked the stuffing out of us and we didn’t recover from it. We did lose players and that’s always part of it, but we lost a few games on the spin and it just knocked the stuffing out of us after a good start, but it’s part of sport.

On a personal level, passing 2800 points is some milestone. We mention to Ste that he is the current highest active points-scorer in rugby league, but he responds “I wasn’t going to mention that! My son absolutely loves it, he tells his mates. There’s a lot of kids in his school who like Widnes and go and watch Widnes, and he loves stuff like that. But he thinks I’m the highest points-scorer ever in the world! He’s only eight, he’s allowed to exaggerate!”

Tyrer has no plans to hang up his boots any time soon and is eyeing up that 3,000 mark. “I’d love to get to 3k before I retire which if I was kicking every week and scoring every week, I’d probably do it in no time but obviously Jack’s here as well and he likes a kick! It might not always be my job but it would be nice to get to 3k. I’m not saying I’m finishing any time soon but I think that’d be a good number to finish on!”

The sport’s highest active points scorer (just to get it in one more time) finishes with a message to the Widnes fans. “I think back to Featherstone. There weren’t many there on the day but they were unbelievable. They had every right to go and get some eggs to throw but they didn’t! They were fantastic against Whitehaven, against York, against Barrow, and everywhere else. All I would say is that when it’s going tough and we’re losing, we’re not doing it on purpose, it’s not because we don’t care, we care as much as anyone. It has hurt, but just keep up the great support because we’re going to need it. There’s going to be more tough games to come, we are going to lose some, but we’ll win some as well and we just all need to stick together.”

Ste Tyrer is proudly sponsored by The Johnson Family (For Frank).