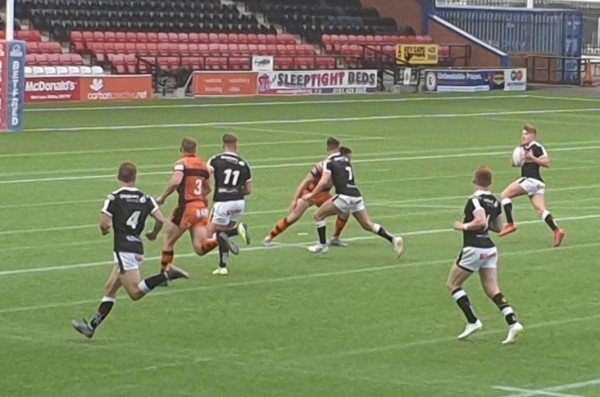 In their last home game of the season, our U19s secured a 42-28 victory in a highly entertaining game which saw 12 tries scored.

They got off to a great start when they found touch from the kick off. The resulting scrum saw the ball moved swiftly along the line for Brad Calland to score in the first 60 seconds. Joe Edge converted.

The early stages were already pointing to an open game and the Vikings soon increased their lead as Liam Brinksman scored following some lovely passing along the line.

Widnes began to throw the ball about and their next try was a cracker. Lewis Else darted over the half line, passed to Brinksman, who drew the defence before putting the supporting Else over. Again Joe Edge converted and at 16-0 Widnes were in total control.

A couple of penalties saw Castleford test the home defence and eventually they crossed the line when hooker Shay North squeezed over.  Ritchie Westwood converted.

This didn’t knock the confidence of the Vikings and they scored two more sparkling tries before the break.  Connor Davies-Aspey scored his first try for the team which resulted from some slick passing at speed, and then Brinksman grabbed his second when he jinked past a couple of defenders to score.

Edge converted both tries and also slotted over a penalty, just before the break, to give his side a comfortable half time lead.

Castleford started the half strongly and had soon reduced the arrears when they kept the ball alive for Jacob Doyle to score.

They then threatened the Widnes line on a couple of occasions and another Tigers try, at this stage, may well have caused panic in the Widnes ranks.

However, any nerves Widnes may have had were soon settled when Brinksman raced away down the left to put Ollie Brookes in. Edge’s conversion made it 36-10 and the game looked to be safe.

Connor Aspey-Davies kicked a 40/20,, and whilst the resulting play didn’t lead to a try, a penalty against Castleford did.

With 20 minutes left Widnes may have taken their foot off the pedal but to Castleford’s credit, they kept plugging away and they were rewarded with three richly deserved tries.

Prop Lewis Peachey was unstoppable from 15 metres as he scattered all before him and Jake Sweeting scored a fine individual try.

A minute from time Joe Summers scored the final try of the game, and with Sweeting converting all three scores, the visitors had given an air of respectability to the scoreline.