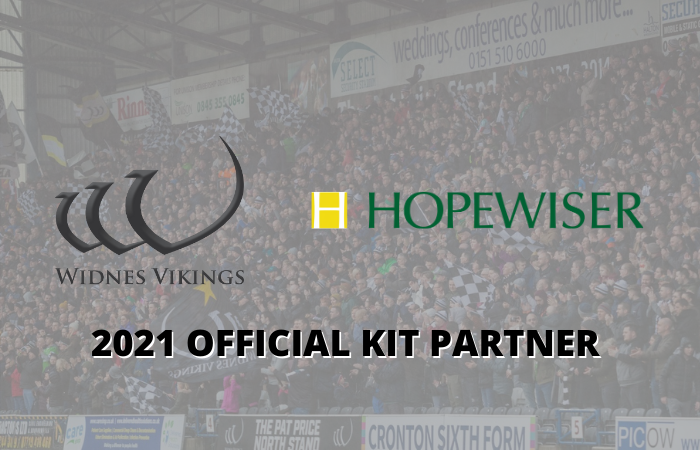 Widnes Vikings are delighted to announce that Hopewiser have extended their partnership with the club into the 2021 season, continuing as official Kit Partners of the Vikings.

Their commercial relationship with the Vikings began during the 2019 season, becoming official partners in 2020, and despite being based in Altrincham there is also a strong family connection to the club.

Founded in 1982, the Addressing business, created in the family attic, spotted a gap in the market for postcoding software. Since then, Hopewiser has grown into a hugely successful company that has offices in both Altrincham and Melbourne, Australia.

Headed up by General Manager, Jon Good, Hopewiser pride themselves on providing accurate, fast and reliable addressing software, with services such as Address Lookup, Data Cleansing and Bank Account Validation.

Hopewiser first engaged with the Vikings as Executive Sponsors of their Championship clash against York City Knights in 2019, as they enjoyed an afternoon in one of the club’s executive boxes.

Following their experience at that fixture the company pledged their support to the club as official Kit Partners, and for the second season their brand will appear on the back of all three playing shirts in 2021.

As well as supporting the club commercially, Hopewiser employ Academy graduate Ollie Brookes, who despite the disruption of the Coronavirus pandemic has hit the ground running, with a bright future ahead within the company.

Family ties also run deep throughout the company as Matt, General Manager of their Australian branch in Melbourne, follows in the footsteps of his Widnes-born mother as a keen supporter of the Vikings.

Throughout the pandemic Hopewiser supported organisations in their transition to providing home deliveries, as some business ventured into delivery for the first time.

Their free advice and access to Address Lookup helped many businesses ensure they captured addresses correctly during checkout, which in turn cut down on failed deliveries and customer issues.

Jonathan Good, UK General Manager of Hopewiser, commented: “We are delighted to be able to sponsor the backs of the shirts again this year.

“Since getting involved we have been hugely impressed with the professionalism and knowledge within the different teams at Widnes, whilst being warm, family orientated and supportive to everyone they are involved with too.

“Ollie (Brookes) has demonstrated this at work, even through such a difficult time in the world. We hope to soon see the Vikings back out on the pitch, scoring plenty of tries, with the fans in the ground, able to enjoy seeing this team pushing to stand alongside the many greats that have played for Widnes over the years.

“All of us at Hopewiser wish Widnes and their fan base all the best.”