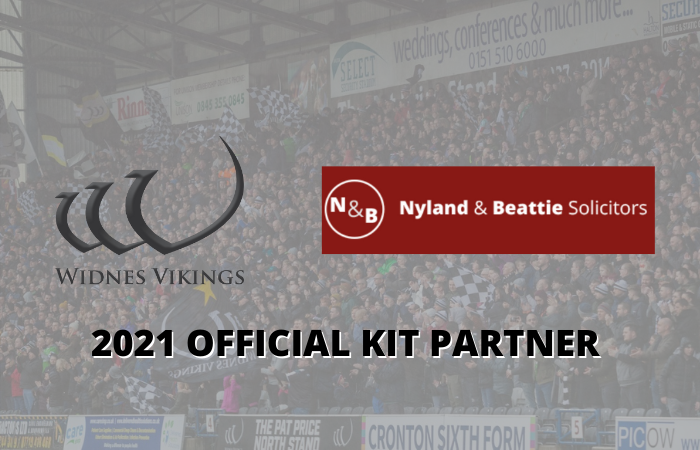 Widnes Vikings are delighted to announce that Nyland and Beattie Solicitors have extended their partnership with the club into the 2021 season, once again becoming official Kit Partners.

The Nyland and Beattie brand will once again be displayed on the sleeves of all three Vikings First Team shirts next year, continuing to re-establish their connection with the club which dates back to the 70’s.

Nyland and Beattie Solicitors have been providing trusted legal services since 1958, lending a helping hand to homeowners, families, and businesses throughout Halton, Merseyside and Cheshire through all life’s up and downs.

Their team of specialist solicitors provide expert support during some of life’s biggest decisions, and offer professional, fair, and understanding representation no matter the circumstances.

Formed over 60 years ago by Frank Nyland, who partnered with Stuart Beattie, the long-established firm deals in all types of legal cases.

Frank was a loyal supporter of rugby league in Widnes, as he worked tirelessly for the club and even held a place on the Widnes RLFC committee during a golden era in the 1970’s and 80’s.

Nyland and Beattie Solicitors has had a long-standing relationship with the club as the Frank Nyland trophy was previously competed for by junior schools within the town, with the silverware now played for by the Widnes Vikings Development Squad.

2020 marked a new milestone in their partnership with the Vikings, becoming Kit Partners by proudly displaying their brand on all three playing shirts, which will once again be the case next season.

Luke Hill, Partner at Nyland and Beattie commented, “With the relationship between Nyland & Beattie and the club stretching back decades, I am delighted to continue what my late father Barry Hill started in renewing the firm’s involvement with this iconic club.

“The Betfred Championship 2021 season marks the next phase in the ever-growing partnership between us and we look forward to supporting both the players and the club every step of the way.”