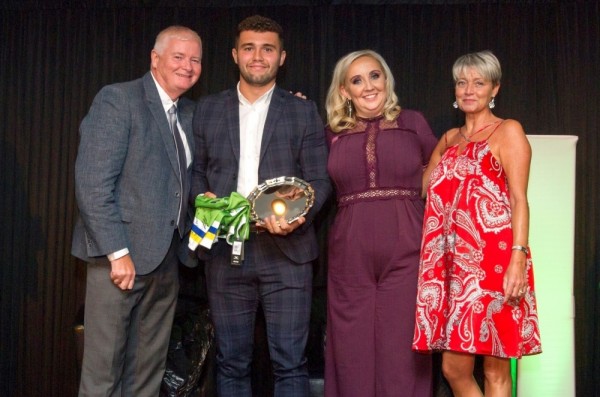 Widnes Vikings held the 2019 Motorpoint End of Season Dinner in front of a packed Bridge Suite on Monday 2nd September, as Players, Staff, Sponsors and Fans came together to celebrate the year.

The evening began with a speech from Vikings CEO Phil Finney, as he summed up the rollercoaster of emotions that the current season has presented, thanking the Staff, Board Members, Players and Supporters for their dedication throughout a tough period.

Then, Chris Price, Chairman of the Board of Directors, seconded those words of thanks before presenting loyal sponsor Anne-Marie Hughes and Alan Rae, for his brilliant work with Widnes Supporters Away Travel, with a special gift.

After dinner was served, the first award of the evening was given to MacGraff Leuluai as he scooped the Whelan Pest Prevention Whack of the Year for his hit in the Round 21 clash with Halifax, presented by owner Chris Smith.

Voted by the guests in the room, Anthony Gelling then picked up the Try of the Season award for his effort in the AB Sundecks 1895 Cup semi-final victory over Leigh Centurions, with his sponsor Barbara Meeks, Managing Director of Delivered Health Solutions, invited on stage to present a commemorative photo of the try.

A special presentation was made to all of the academy graduates that had debuted during 2019, with Jacob Dugdale, Ben Davies, Joe Edge, Sam Freeman, Calum O’Neil and Jayden Hatton receiving their debut shirts from Kieron Purtill. The Vikings Head Coach then stayed on stage for an interview, as he recalled the highs and lows of his first year in charge of the club.

Club Director, Roger Harrison MBE, then made a presentation to all five of the academy graduates that had been inducted into Club 20 during the 2019 season, with Brad Walker, Keanan Brand, Joe Lyons, Owen Farnworth and Lloyd Roby invited onto the stage.

Roger Harrison then made the presentation of the Young Player of the Year award, which was given to Jayden Hatton after an impressive debut campaign in which he scored nine tries in his 14 appearances.

The Motorpoint Players’ Player of the Year was then awarded by competition winner Charlie Winstanley, who had the honour of presenting the award to Keanan Brand, who gained the respect of his peers after making 31 appearances and scoring nine tries during 2019.

To present the Sleeptight Beds Fans Player of the Year award, owners Helen James and Gary and Jude Farrar were welcomed on stage as Jack Owens scooped the accolade after a great season on his return to the club, scoring 17 tries and knocking over 101 goals in his 29 outings.

As the night drew to a close, club captain Hep Cahill was invited to the stage to receive a Special Recognition Award for his brilliant service to the Vikings since his arrival in 2012, as he spoke about some of the standout moments of his time in the town.

Chris Dean also picked up a Special Recognition Award following the news of his imminent retirement at the end of the 2019 season, with the second rower making 179 appearances, scoring 39 tries and kicking one goal in his eight years at the Halton Stadium.

To round off the night, the whole squad were invited on stage to receive a commemorative gift supplied by Club Photographer Ste Jones of RL Pix, before a final word from the skipper Hep Cahill to thank the fans for everything they have done throughout the year.