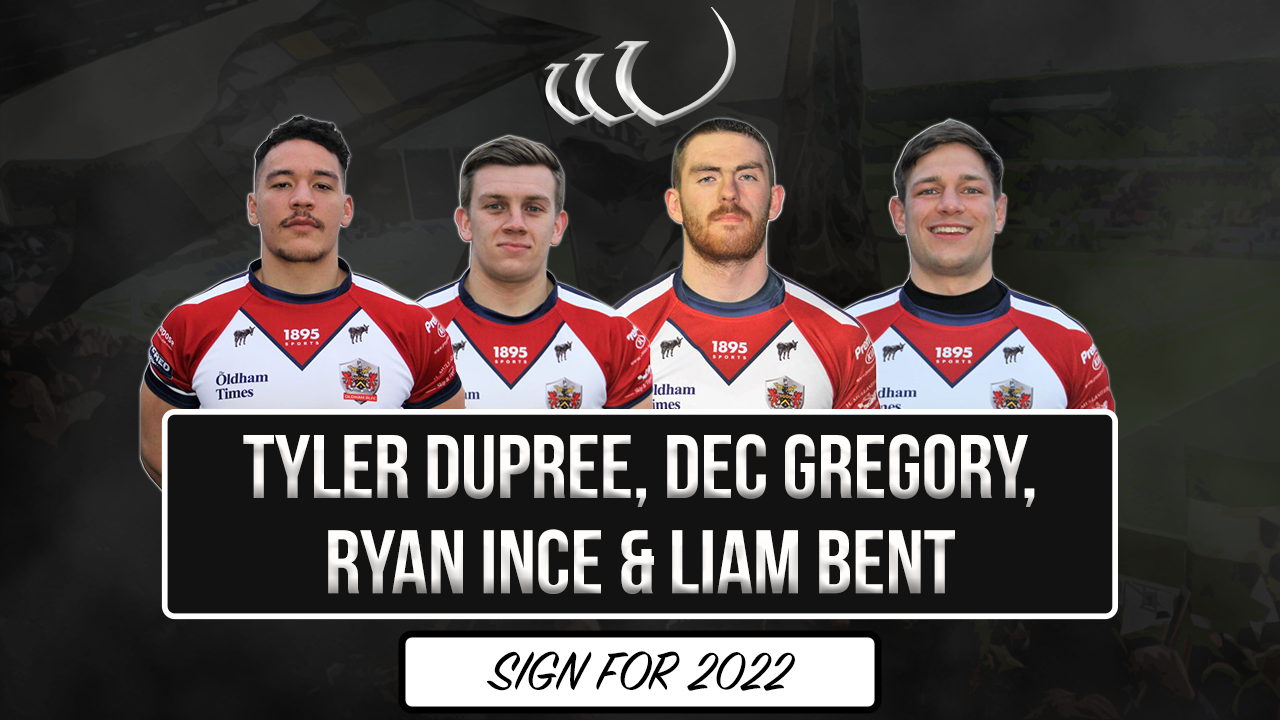 Widnes Vikings are delighted to announce the signing of quartet Tyler Dupree, Dec Gregory, Ryan Ince and Liam Bent on the expiry of their contracts at Oldham.

Tyler scored 10 tries in 18 appearances for Oldham in the 2021 season, after signing from Leeds Rhinos as a product of their academy where he gained representative honours against the Australian Schoolboys.

The 21-year-old has been one of the Championship’s brightest and most sought-after young talents this season and will add to the Vikings’ new-look pack for next year bringing a dynamism and explosiveness to the squad.

On signing his new contract, Tyler said: “I’m buzzing to get started and looking forward to a full pre-season with the facilities at the stadium. I’m ready to compete and aim for the play-offs with the fans behind us and I can’t wait to meet the lads.”

Wigan-born Gregory is a dangerous live-wire hooker with plenty of energy, having gained experience playing for Salford Red Devils’ academy before moving onto Rochdale Hornets and North Wales Crusaders, prior to joining Oldham last year for 2021.

Dec will bring energy, enthusiasm and much-needed competition for the hooking role within the squad for 2021.

Dec says he is “absolutely over the moon” to be joining the Vikings next season. “It feels like there is something special coming together within the club and I’m delighted to be part of that. It’s a club enriched with history within Rugby League and I can’t wait to get started.

“The status of the club demands success and I’m hoping I can help the team experience as much as possible this coming season.”

Ryan Ince is no stranger to the town after coming through the Widnes academy system, playing his junior rugby for Moorfield before going on to turn out for the Vikings in the Super League and representing England youth and academy during his first spell here.

Ryan is a natural try scorer most recently crossing for 19 tries in 22 games for Widnes in 2019 before joining Leigh Centurions and then moving on to Oldham for 2021.

Ryan will add to and complement the very exciting back line that is being constructed for the season ahead.

‘Incey’ is delighted to be coming home next season: “After leaving Widnes I never ruled out coming back. I enjoyed my time there and with it being my home town club as well as coming through the system, it makes it feel a lot more like home for me.

“A lot of people at the club know what I offer as a player but since my first spell I feel I get through a lot more work in matches now and my understanding of the game has improved.”

Liam Bent is another young very experienced forward to add to the pack for next year, with the hard working 23-year-old regularly topping the tackle counts recording over 50 tackles per game.

The Wigan-born loose forward previously played for Salford Red Devils, and leaves the Roughyeds having played almost 100 games for the club and twice having won their Supporters’ Player of the Year award.

‘Benty’ is relishing the challenge of joining Widnes ahead of next year: “I’m really looking forward to the challenge ahead, I can’t wait to get started and hopefully have a big year with the lads.

“I’m hoping we can make it into the play-offs and contend for the top spots in the league.”

All four players join the Vikings on one-year deals ahead of the 2022 season.