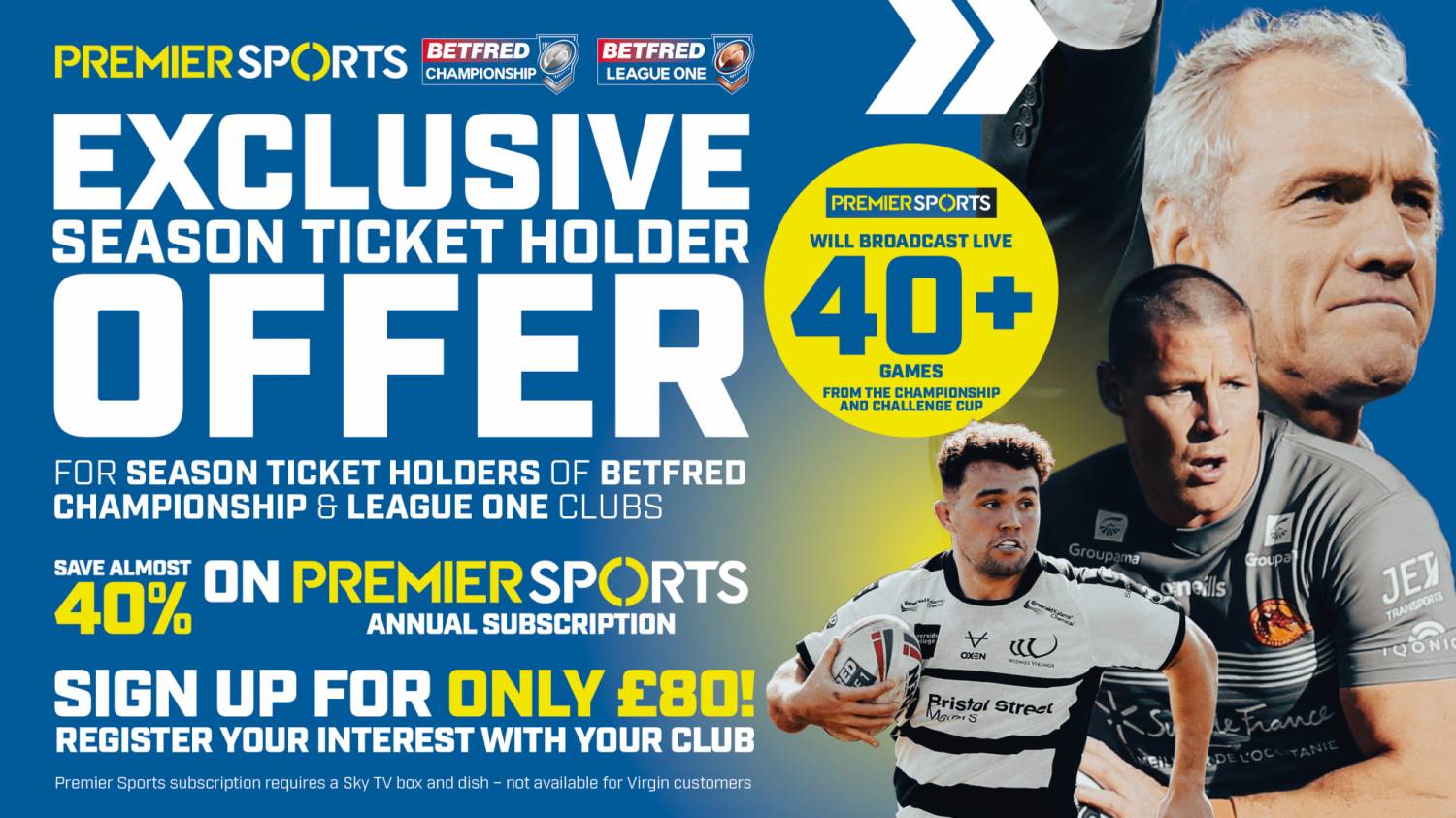 Season Tickets for the Betfred Championship and League 1 will be even better value in 2022 with supporters of all 25 clubs to be rewarded for their loyalty with a special discount subscription to Premier Sports – to celebrate the introduction of Monday Night Rugby League.

Anyone who buys a season ticket will be able to add an annual Premier Sports subscription for only £80 – a reduction of almost 40% on the regular annual subscription of £129, and a saving of £100 on a monthly subscription.

With over 40 matches guaranteed live and exclusive on Premier Sports in 2022, from the Betfred Championship, the Challenge Cup and including the Play-Offs and the Summer Bash, that means a cost of less than £2 per game – with so much more live sport from Britain and around the world also thrown in.

This offer is only available on Sky and the Premier Player.

We will be contacting Season Ticket Holders for the 2022 Season with this special offer in the coming days and weeks, with full details of how to apply.

You can renew your South Stand Season Ticket for 2022 until tomorrow (Wednesday 10th November) by clicking the button below, after which you can purchase all general sale 2022 Season Tickets.

Mark Foster, the RFL’s Chief Commercial Officer, said: “We’re delighted to be able to include this fantastic offer to loyal season ticket holders from all clubs in the Betfred Championship and League 1, as part of our new partnership with Premier Sports.

“With the fixtures for the 2022 season to be published later this week, there is so much to look forward to in both leagues – we’ve already seen a raft of big name player signings and the odd high-profile coaching appointment to whet the appetite.

“We’ll be announcing the Monday Night selections for the first part of the season when the fixtures are published, and we’re also working on the best ways of supporting clubs with marketing those games to home and away supporters to ensure we showcase the Betfred Championship in the best possible way.”

Richard Webb, COO of Premier Sports commented, “We’re thrilled to be in a position to offer a special discount to loyal season ticket holders where they can subscribe to Premier Sports for just £80 for a 12 month subscription! This works out at just £2 per game from the Championship, Challenge Cup matches, the Summer Bash and the Million Pound Game as well as all the great content we have to offer in 2022.”