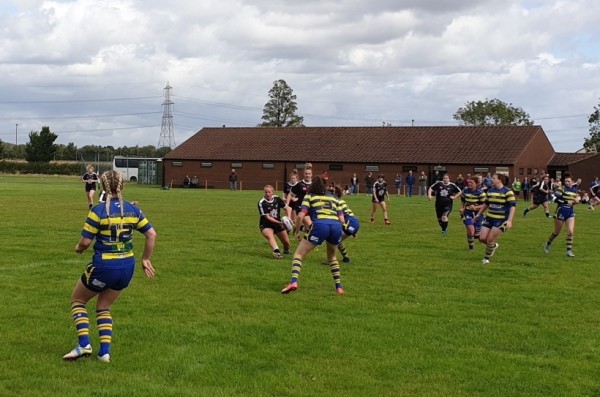 The two previous encounters this season had seen a draw plus a narrow Vikings victory.  So it was no surprise that the two teams fought out another tense affair with Widnes claiming their third league victory of the season.

Apart from the opening couple of minutes, Oulton dominated possession and territory for vast amounts of the half.

Widnes continually coughed up the ball to put themselves under pressure but a tremendous defensive effort kept the visitors at bay.

A great Juliet Porter break saw Widnes with a rare scoring opportunity and this set the platform for the opening score.  Oulton were bringing the ball away from their line when Rachael Porter stripped the ball in a one on one tackle.  er pass saw debutant Hannah Cleaver crash over for a try with virtually her first touch of the ball.  Aimee Cleaver added the conversion to put the Vikings six points ahead.

This spurred on the Vikings and they were unlucky not to score again. Aimee Cleaver’s cross kick saw Hannah Quirk hauled down just 10 metres short and Charlie Magraw’s 40 metre run looked to have put Abby Latchford in but the ball was knocked on.

The second half saw the visitors once again camped in the Widnes half but they couldn’t pierce a resolute defence.

It took 16 minutes for the Vikings to cross the half way line but they were struggling to apply any pressure near the try line.  Despite the strong running of Rachael and Juliet Porter, the forward drives of Nicholette Postlethwaite and Jazz Mason plus the prompting of Charlie Magraw and Aimee Cleaver, it was Oulton who looked the more likely to score next.

With 10 minutes left Widnes produced their best rugby of the half which saw Taz Corcoran pulled down just a couple of metres short of the line.

Minutes later Oulton were penalised in front of the posts and Aimee Cleaver added the two points to virtually seal the game for the Vikings.

The final moments of the game saw Widnes looking for another score but the final whistle went to signal the end of another tight game between these well matched sides.