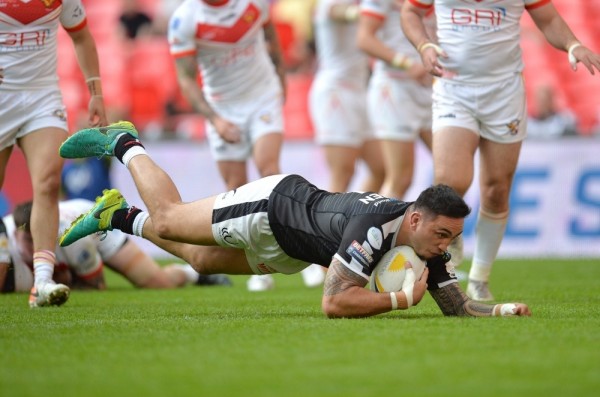 Widnes Vikings returned to Wembley Stadium for the first time since 1993, as they were beaten 36-18 by Sheffield Eagles in the AB Sundecks 1895 Cup Final.

The Eagles produced a dominant second half display to deny the Vikings a chance to lift silverware in front of a brilliant following of supporters who we vocal throughout.

Widnes lost Jordan Johnstone just four minutes into the game, as he was stretchered off and taken to hospital with a suspected fractured eye socket.

On 13 minutes MacGraff Leuluai forced an error to give the Vikings an attacking set 20 metres from the try line, before Patrick Ah Van raced onto a drop-off to find a hole in the defence. Harrison Hansen was in support and crossed for the opening score of the final, with Jack Owens adding the extras.

From the kick-off set Widnes were in again, as Brad Walker offloaded to Tom Gilmore, who’s inside pass sent Ted Chapelhow through a gaping hole in the defence. The front rower held his nerve as he drew in the fullback and sent Chris Dean over in support to open up a 12-point lead.

After 21 minutes the Eagles broke their deadlock, as Aaron Brown proved too strong from close to barge over the try line despite the best efforts of the Vikings defence.

Just as their opponents did, Sheffield completed a quick-fire double to level the scores, as Owens had the ball pinched from his grasp by Anthony Thackeray who raced 80 metres to score with the Widnes defenders protesting that it was a two-on-one steal.

The Eagles thought they had hit the front on the half hour mark, as Josh Guzdek crossed on the right edge only for the referee to pull play back for a forward pass.

With five minutes of the half remaining, Widnes ensured they would be leading at the break as Danny Craven dummied his way to a half break before fighting for a quick play the ball. On the back of that, Gilmore jumped from dummy half and burrowed his way over to put his side back in front.

The last significant play of the half saw Craven drag a field-goal attempt wide, as the Vikings headed for the sheds with a six-point lead.

The Widnes lead was pegged back to two points after just one minute of the second half, as Pat Walker’s towering bomb caused problems for Jayden Hatton, who fell as he back tracked to try and field the kick, as Joel Farrell collected a simple score.

Seven minutes later the Eagles hit the front for the first time in the contest, as they broke down the right edge through Guzdek, who found Ben Blackmore in support and sent the winger racing towards the try line. Despite Keanan Brand’s cover tackle the wide man still managed to offload the ball, and it eventually found its way to Brown who scored next to the sticks.

On 55 minutes the Eagles were in again as the Vikings began to crumble, with another break down the right-hand side being finished by Corey Makelim moments after Pat Walker had missed a penalty goal.

Walker missed another penalty goal before Widnes began to rally and pushed for a try that could have swung the momentum in their favour, however the closest they came was through Craven, who knocked on after dummying his way through the line.

The afternoon was summed up when great work from Brand saw the Vikings force a goal-line drop-out, only for Gelling to knock on attempting to field the kick.

With four minutes left to play, any chance of a Wembley victory was gone, as Hatton fumbled the ball in a tackle which handed Brown his hat-trick try.

As the hooter sounder, Walker kicked a penalty goal from in front to wrap up the victory for the Eagles, as the Vikings were denied a chance to lift silverware at the National Stadium.