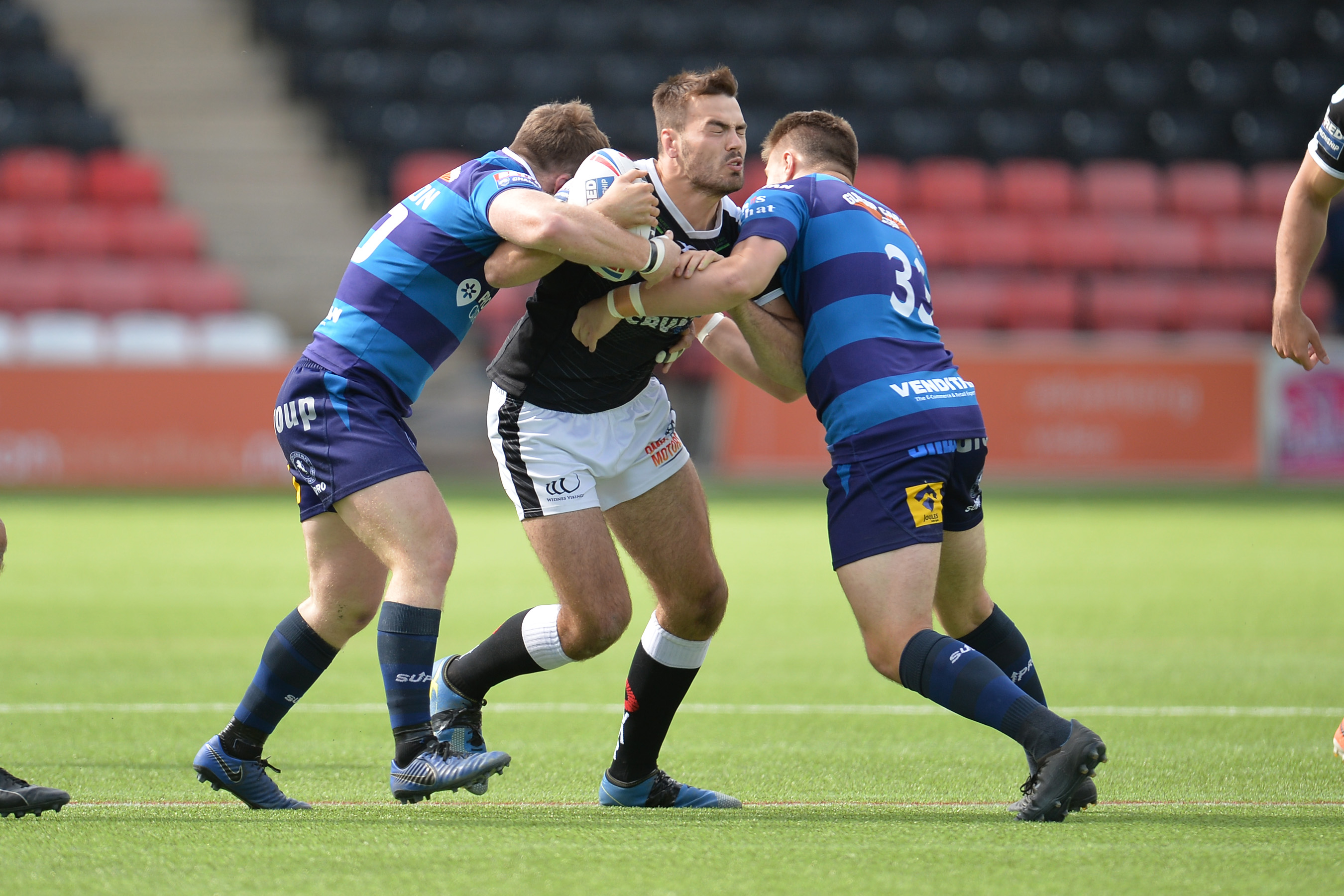 Chris Dean marked his final home game in a Widnes Vikings shirt with a try, as he helped his side pick up a 36-28 victory over Swinton Lions.

The Vikings’ Championship status had already been confirmed for 2020 after Barrow Raiders’ defeat a day earlier, however the hosts ensured that their home campaign would be brought to an end with a win in a high-scoring affair.

Dean had announced his intentions to retire from the sport prior to kick-off, and produced another brilliant performance in black and white to mark his last appearance at the Halton Stadium.

Kieron Purtill made five changes to his line-up from the side that walked out at Wembley, as Lloyd Roby, Joe Lyons, Josh Ganson, Ellis Robson and Jacob Dugdale were brought in.

Early on, Dan Norman was held up over the line before a pair of Danny Craven kicks caused problems for the Swinton defence, the first being dropped in the air by Anthony Gelling before his second bounced out of play before Jack Owens could pounce.

It took 19 minutes for the deadlock to be finally broken, as Widnes advanced to the Swinton 40 off the back of a penalty, and from the resulting set Owens’ delayed pass sent Keanan Brand racing in.

Three minutes later the home side were in again, as great yards from Owens and Anthony Gelling set a platform for the Vikings to attack. Owens was the creator again, as Richard Lepori attempted to intercept his cut-out ball but instead helped the pass towards Patrick Ah Van who was too strong from close range.

Swinton benefitted from a penalty for holding down to open their account just after the half hour mark, as they put the ball through hands and sent Mike Butt over at the flag.

The Lions then hit the front with five minutes of the half remaining, as Samy Kibula created space for Matty Ashton to break, before going over in support for a well worked effort.

A clever short kick-off was taken by Gelling, who raced towards the 10 metre line before winning a penalty, and the Vikings had the last chance of the half when Owens forced a goal-line drop-out soon after.

It came to nothing though, as Craven’s last tackle kick was taken well by Butt, meaning Widnes would trail at the break.

A hectic second half started with Dean and Gelling combining to create space for Roby on the right edge, as he broke and used the supporting Dugdale to his advantage by dummying the pass and diving over out wide.

With Craven causing problems with his kicking game all afternoon, Owens plucked another one of his bombs out of the air soon after and found an offload to Brand. The centre kicked for the corner and the bounce fell favourably for Ah Van, who once again had too much power from close range.

Three missed conversion attempts meant that the lead stood at just eight points, until Owens finally found his range to add the extras on to his own effort after 52 minutes. After the fullback had been dragged into touch illegally, he found possession out the back during the resulting set and caught the defence napping by racing through a gaping hole.

With the Vikings in command a breakaway effort gave the visitors hope, as the lively Jack Hansen charged down Craven’s kick to race 70 metres and score.

Immediately after, Gelling thought he had a try only for a pass in the build up by Roby to be called forward, however on 67 minutes the loudest cheer of the game greeted Widnes’ next score. In typical Dean fashion, the second rower charged onto a flat pass from close range and found his way over the try line, marking his final home appearance with a four pointer.

Two minutes later the Vikings number 12 was rolling back the years, as he exploited a gap in the Swinton defence before drawing the fullback and sending Ganson over for his first try for the club. Dean was then given the honours of converting the try, as he knocked over the two-pointer from in front.

The second half ended as it had begun, in chaotic fashion, as Nick Gregson burrowed over from close range before Hansen kicked straight from a scrum inside his own 10 metre for Ashton to chase, with the fullback hacking the ball in the in-goal area to score.

Despite their two late scores, Swinton were unable to mount a comeback as the Vikings ensured that their final home game of a rollercoaster season ended with a win.