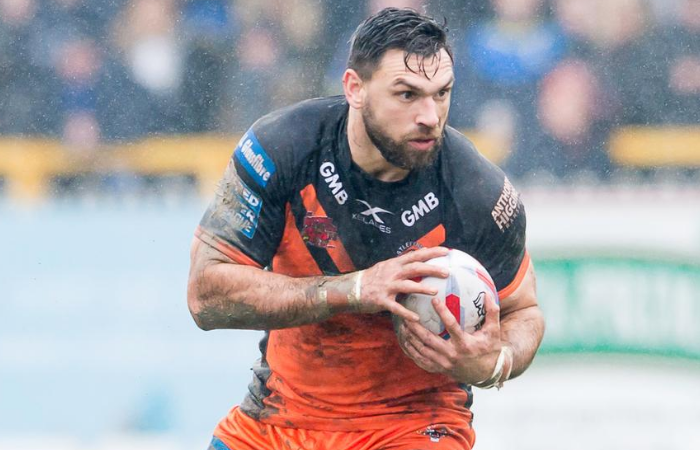 Matt Cook’s career has seen him cross paths with the Vikings on a number of occasions, racking up almost 300 top-flight appearances for four different clubs, but despite most of his career being spent in Yorkshire the forward has strong links to the town of Widnes.

Black and White supporters won’t have the fondest of memories of the 33-year-old, who has been on the winning side on four of his five appearances against Widnes while in Castleford colours.

Spare a thought for Matt’s father though, who on each of those occasions had contrasting feelings about the outcome of those victories for the Tigers.

That’s because he was born in Widnes, and while the pride of watching his son crash over for tries in three of those fixtures must have been an incredible feeling, Matt’s Dad is now looking forward to watching his son run out for his hometown club.

“One of the big reasons for me to sign at Widnes and not any other Championship club is that my Dad is a born and bred Widnes lad,” Matt Cook revealed in his first interview with the Vikings.

“He’s chuffed to bits as well. He keeps saying ‘you’re going to be playing for my hometown team’ and he is very excited.

“He was born on either Fairfield Road or Lockett Road, and he is always drumming it into me so he will be very proud when I finally make my debut for Widnes. It will be a great moment for me in my career.”

The experienced forward caught the eye of a number of clubs when news of his expiring contract became common knowledge, and his family ties to the Vikings made the decision a little easier.

Add to that his living situation and the fact that one of the most successful coaches in rugby league reached out personally, then it looks to have been the perfect match.

“Tim Sheens reached out to me when he realised I was available and off contract, putting the feelers out to see if I would be keen to jump on board and join the Vikings next year.

“It made perfect sense. I live nearby in Warrington and I’ve been commuting to Castleford over the last six years, so it was a great opportunity to join Widnes who are very local to me.

“It’s also a chance to play under Tim Sheens who has been very successful over the years, and a real opportunity to hopefully do something special at Widnes.

“I always relish the opportunity to learn as much as I can, no matter how old I am because as a player I think you can always keep developing and keep improving.

“I got a lot of that out of Daryl Powell over the last six years, he brought my game on leaps and bounds, so for Tim Sheens to then approach me it felt great given his track record.

“It’s an opportunity to experience a different coach, who will probably be able to get even more out of my game so I thought it would be a great opportunity to team up with him at Widnes.”

With a vast amount of top-flight experience with Bradford Bulls, London Broncos, Hull KR and Castleford Tigers, Matt will be a great addition to the Widnes forward pack.

Equally at home in the front and back row, his power and aggression in the middle is something that Tim Sheens will be looking to utilise once the 2021 season is upon us.

Although the Championship is a step down in terms of divisions, Matt is under no illusions as to how tough the competition will be, drawing on the advice of the players he is following in the footsteps of.

“It isn’t going to be an easy ride and some of the players I’ve spoken to in the past who have made the step down to the Championship have all explained it’s just as, if not more, physical than top-flight Super League,” he continued.

“I’m prepared for that challenge. It’s exciting to see if I can do something special and challenge myself in that way, hoping to get the team promoted back up to Super League.

“I know Widnes has got a massive history and I think they are a team that should be in Super League. With the fan base, the history and the facilities they have I really think Super League is calling it’s just a case of getting back there now.”

One of the things Matt is looking forward to most is playing in front of the Black and White army, who he has experienced as a visiting player for Castleford over the years.

He’s also hoping to make home advantage count whenever he steps out at the DCBL Stadium in the club’s colours, having performed well there in the past.

“From playing at Widnes in the past I’m definitely expecting the fans to be vocal.

“It’s always a different challenge coming to play there, first off with the artificial pitch for away teams. Being able to play on it week in week out and your body getting used to it gives you as the home team a massive advantage.

“I’ve always thoroughly enjoyed playing at Widnes. I’ve always, touch wood, had good games there and the pitch seems to suit my style of play so hopefully I can continue that during my time at Widnes.

“I’ll be relentlessly working hard for the team. Depending on how the boss wants to use me I think I can bring a lot of power and go forward into the pack, and hopefully some leadership to the team.”

Just like everyone else in the sport of rugby league, the Vikings new signing has had to deal with huge uncertainty over the future of the current season following the Coronavirus pandemic.

Unlike Widnes and the rest of the Championship and League 1 clubs, Matt will be back on the pitch to resume his 2020 season after the return of Super League was confirmed.

The forward has opened up on the difficulty of that period without rugby league, and has praised the Tigers conditioning and medical staff for keeping him in top shape ready for a return to action.

“To be sat at home not knowing when anything would happen again, if at all, and trying to keep yourself motivated and ticking over.

“At the start of it all it almost felt like a holiday and no one knew the full ins and outs of how serious the whole pandemic was. As the seriousness started to unfold and the deaths that came from it, to then how delayed the Super League restart was has been crazy.

“I wouldn’t have thought four months down the line that we would only just be starting back up and how many people so sadly lost their lives because of it all.

“The week we went into lockdown it was a case of come and raid the gym, take what you can home and then the club would build home programmes based on what equipment you’ve got access to.

“The conditioners and medical staff were fantastic at keeping us topped up and it has probably been really tough for them. They have had to work out how to get us ready to peak at the right time, because no one knew how long we would be at home for.”

Matt’s concentration now turns to ending the season in the best possible way with Castleford, hoping to bring the curtain down on a six-year spell with the club by lifting silverware.

While being committed to the Tigers’ cause until his current contract expires, the Vikings bound forward is hoping to build excitement in Widnes fans with his performances throughout the remainder of the season.

“After being there for six years I want to make sure I sign off on a high note with them,” he concluded.

“I always pride myself on that if I’m contracted to a club I’m fully committed until that contract ends.

“I want to make sure that I leave on a high note, hopefully with some silverware with Castleford.

“At the same time I want to show all the Widnes fans what I’m capable of and give them something to look forward to next year with what I can bring to the team.”