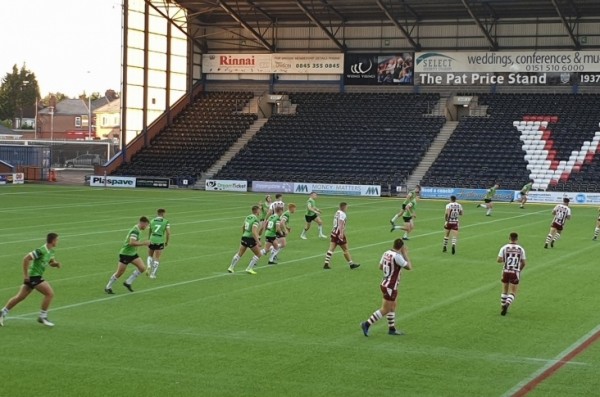 Whilst this game was over by half time, our U19s put in a gutsy second half performance against a Wigan side who top the league and have only lost one game this season.

Wigan were quick out of the blocks and Umyla Hanley had a try ruled out before hooker Aiden Roden jinked past three defenders to score under the posts.

Three minutes later quick hands put James McDonnell over and with Harry Smith converting both tries the visitors had a 12 point lead.

It was soon 0-18 as poor defending saw Joe Shorrocks race over from 25 metres.

The Widnes defence couldn’t contain the opposition forwards and McDonnell crashed over for his second try. His hat trick try came on 28 minutes and this was followed a Ben Holcroft effort as Wigan began to run riot.

Umyla Hanley chimed into the line to stretch over and score, and with Smith maintaining his 100% record, the Warriors held a commanding lead at the break.

The second half started in similar vein, and when McDonnell scored his fourth of the game, it did look as though Wigan would post a huge score.

However, some enterprising Widnes play gave them a bit of encouragement and slowly the final 30 minutes of the game became more competitive.

Jake Burns was hauled down just short of the line, before Liam Brinksman scored in the corner after a neat kick in the left corner.

Wigan responded immediately as Hanley made made a 50 metre break which was finished off by Harry Rushton. Smith made it 4-52 with his eighth conversion but from then on Widnes dug in and started to play some good rugby.

Glover and Smith combined down the right to go 60 metres downfield, and on 67 minutes, a lovely cross kick was palmed back for Billy Glover to charge over. Joe Edge landed the conversion.

Things started to get a bit feisty as tempers flared however good Widnes defence kept Wigan at bay and some enterprising play saw Joe Edge collect the ball on the wing and he raced round under the posts to score his side’s third try. He converted his own score to complete the scoring.