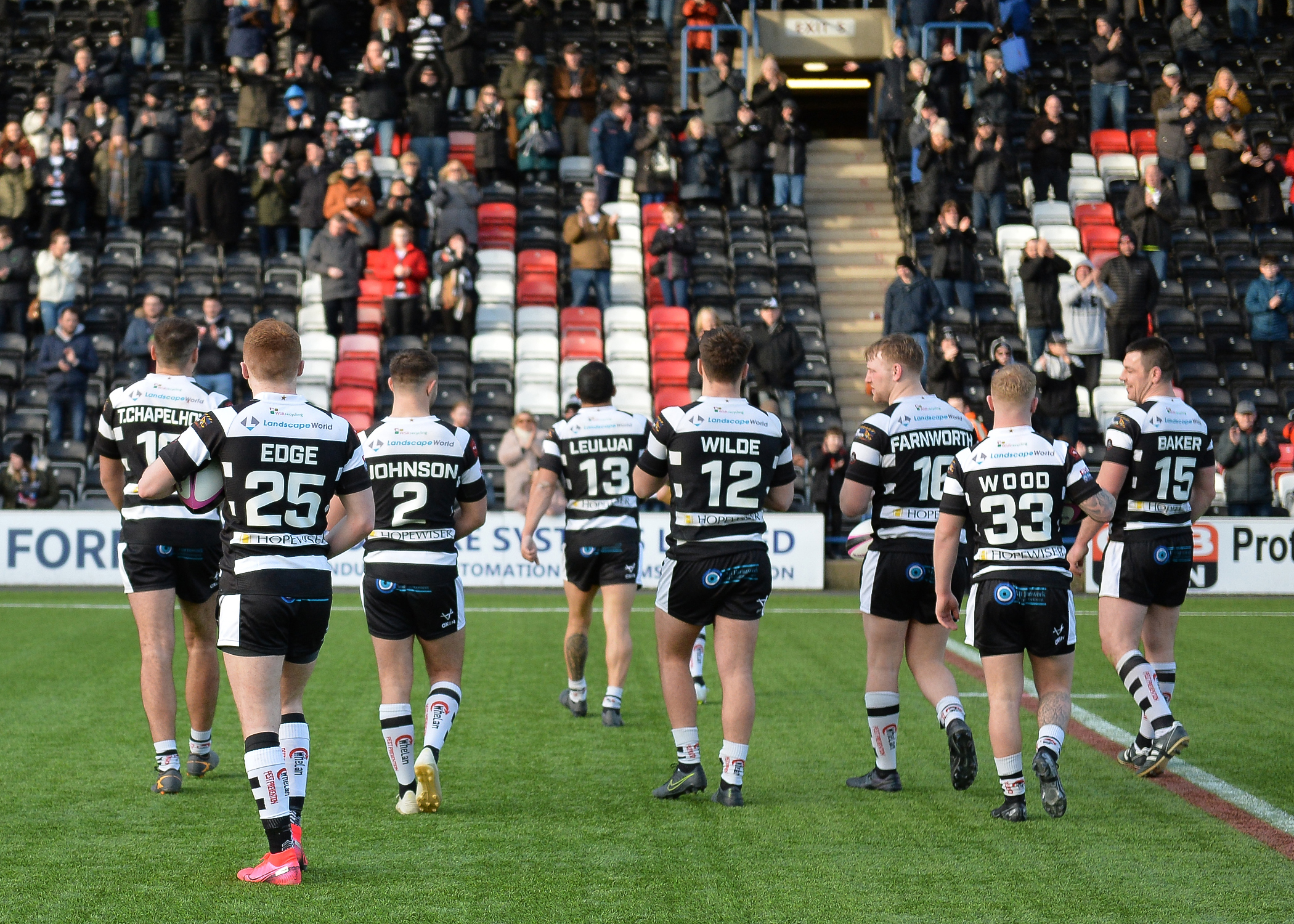 Widnes Vikings would like to update supporters on the current operations of the club, and how progress is being made behind-the-scenes during the suspension of rugby league.

It has been extremely difficult for the club to make any announcements of late, as the RFL are working hard alongside all Championship and League 1 clubs to reach a decision regarding the current season.

While this has been on-going, with no decision made yet regarding the 2020 season, we have been unable to provide an update to supporters – simply because there is no new information to bring to our supporters’ attention. We have circulated all RFL updates via our official website though, in an attempt to keep our fanbase up-to-date with everything our governing body is working on.

Although we’re unable to bring an update on the 2020 season and how it will be concluded, we can bring you information regarding the current situation of the club during these testing times.

As soon as rugby league was suspended, we made a conscious effort to try and bring opportunities to our supporters which helped them stay connected, active and occupied during lockdown.

Significant time and effort has been placed into boosting our Widnes TV platform, sourcing and providing a number of past games with the help of a number of supporters. With over 90 hours of footage and counting, and over 400 subscribers, we hope that the games uploaded have helped bring supporters their Vikings-fix despite the suspension of rugby league.

Prior to our First Team playing and coaching staff, and the majority of our administrative staff, being placed on furlough we also attempted to contact all Season Ticket holders. While we were unable to reach all ST holders, of which there are over 2,000, we hope that we brought some joy to those contacted before the players were placed on furlough.

We also ran the hugely successful ‘Train With The Twins’ sessions on our Facebook page, engaging the younger generations of our community with LIVE fitness sessions to ensure they remained active. This saw us reach 55,000 people over the course of five sessions, with 12,181 engagements. Although these sessions were cut short, it helped keep children and adults in our community active from home during the strictest period of lockdown. While these sessions have been unable to go ahead under furlough, we are still providing daily workouts every weekday to ensure members of our community are staying active and healthy from home.

Our Educational Packs were also greatly received during a period in which schools were closed and many parents were forced to home school their children. These combined maths, literacy and art with Widnes Vikings themed problems and questions, helping youngster of our local community to also stay mentally active.

The decision to take advantage of the furlough scheme at the earliest possible opportunity was an obvious one, as it helped provide short term stability and we hope secure the long-term future of our club. Ever since overcoming the threat of liquidation following our relegation from Super League, we have put a number of plans in place to help strengthen the foundations of the club and endeavour to have a bright future ahead.

By placing over 90% of our staff on furlough leave it has helped the club maintain a stable position, as has the incredible backing from supporters and sponsors during these difficult times.

We must also thank Halton Borough Council, and in particular Chris Patino, who have worked constructively with the club throughout this period. This has led to the club and Council arranging a rent freeze on the DCBL Stadium and the facilities we normally utilise, which in turn has helped secure our finances.

Alongside these cost saving measures, we have also been able to generate income sensitively, taking into account the financial impact the pandemic has had on our supporters. Rather than pushing the sale of stock continuously during this period, we have worked hard with our Kit Manufacturers, Oxen Sports, and our Online Store providers, Elite Pro Sports, to give supporters access to sales on 2020 Replica and Training Ranges.

We have received a number of enquiries surrounding Season Tickets for the current suspended season, with supporters eager for answers on what will happen if the season is cancelled. This is a complex situation, and the RFL is working hard alongside the government to ensure we can return to playing when it is safe to do so. If the season were to restart, Season Tickets would still be valid which is why currently they cannot be cancelled.

In any event that the season were cancelled, full details regarding Season Tickets would be made available to supporters – however as there has been no decision as of yet we are unable to communicate any further on this.

What we must advise though is that supporters refrain from cancelling their direct debit payments, for those who took out the finance option during the Early Bird period. All credit agreements are with Premium Credit and not the club, and while we understand supporters may be frustrated at having to pay while rugby league is suspended, any cancellation of payments would negatively affect your credit score as you have entered into a finance repayment scheme. It would also mean that your Season Ticket would no longer be valid in the event of the 2020 season being restarted.

Premium Credit, like all other lenders and banks, are offering Payment Referrals (or Payment Holidays) so that you can delay the repayment of your Season Ticket during these times. All information on this can only be found by contacting Premium Credit directly though, as they provide and manage your finance. As a result of this, Widnes Vikings would not be able to make any amendments to your finance agreement.

Below is a link which will give you more information on Premium Credit’s Payment Referral scheme.

Also, you can find full contact details for Premium Credit at the below link.

While supporters are frustrated at being unable to utilise their Season Ticket, it is also hugely disappointing for us as a club that we have been unable to enjoy more memorable moments together at the DCBL Stadium. After losing the income from last year’s Season Ticket sales and Sponsorship deals due to administration, we made the decision as a club to honour all Season Tickets and Commercial Deals. Morally, we believed this was the correct decision for the club and our supporters, especially after the incredible effort from our local community to help save Widnes Vikings from liquidation.

Ahead of our first full season under new ownership, the club finally had an opportunity to strengthen the foundations on which the club stands upon due to the income of Season Tickets and Sponsorship deals. This income had been lost in administration and is hugely important in not only helping the club stay financially stable, but also in progressing towards the goals we have set for the future.

Our supporters are incredibly important to everything that we do as a club, as all of the decisions we make are made with our fans in mind. Without the overwhelming levels of support that we received almost 18 months ago we would not be here, which is why we are constantly looking to repay that faith.

There are countless stories of selfless acts that have contributed to saving and progressing Widnes Vikings, from donating lost Season Ticket money to the incredible number of VIQI contributions and the unwavering support on the terraces home and away every week.

Our message to supporters is that we know this relationship isn’t a one-way thing, and we understand that we have an obligation to you to communicate honestly, engage and inspire and treat you as you deserve, and that’s been a big part of our ethos as a club over the past year.

As a club, we need to continue to build our supporter base, and bring through the next generation of young Vikings supporters to the DCBL Stadium, whilst understanding the need to maintain and keep the loyal core of fans we already have.

During this time, the club have been working hard behind the scenes to put together ideas and initiatives in which the club can continue to progress once things get back to ‘normality’, and a lot of that is with the supporters involved and at the heart of it all.

As fans of Widnes Vikings, we would like you to be a massive part of the solution moving forward, as we are in this together.

Hopefully there will be resolutions not too far away, and we can come together at the DCBL Stadium to show our support to Tim Sheens and the lads. Stay safe and we hope to see you all soon.