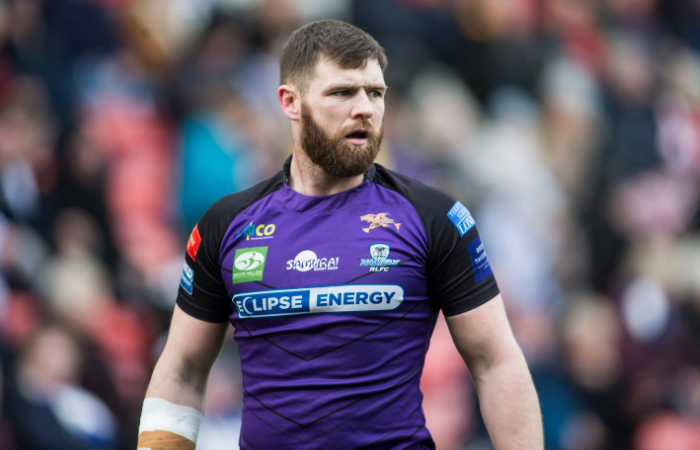 Widnes Vikings are delighted to announce the signing of Steve Tyrer on a one-year deal ahead of the 2021 season.

Halifax RLFC confirmed that the 31-year-old centre was leaving the club at the end of his current deal, having spent nine years at The Shay.

The Vikings have acted quickly to secure the services of the former St Helens academy graduate, who will begin his second permanent spell with Widnes in 2021.

It will be the fourth time that Steve has been at the club though, having spent loan spells at the DCBL Stadium in 2008 and 2009, before signing a one-year deal in 2011.

During his time with the Vikings, Tyrer made 37 appearances in total and scored 28 tries as well as kicking 145 goals, a total of 402 points.

He eventually left Saints for Widnes in 2011 though, and after one full season at the club departed for Halifax where he spent the next nine seasons becoming a huge fan favourite.

In the years that followed, Tyrer has gone on to make 217 appearances in Blue and White, scoring 115 tries and kicking 770 goals to rack up exactly 2000 points, placing him as the second highest point scorer in the club’s history.

During that period Steve also picked up the 2015 Player of the Season award, helping Fax make the top four to qualify for the Super 8s Qualifiers competition. His form was pivotal in helping the club secure three top four finishes in a four-year period, becoming vice-captain during his time at The Shay.

The 31-year-old also equalled the record for most points in a single game with his 32-point haul against Whitehaven in 2016.

On his return to Widnes Vikings, Steve Tyrer commented, “I’m delighted to have signed for the club. It is a club that has always been close to my heart really since I first played there in 2008, so to get another crack at it is something I am really looking forward to.

“I’ve got some really good friends here at the club already in Shane Grady, Matty Smith, Danny Craven and Jack Owens, so getting to play alongside some of my good mates again was a big factor. I live in Widnes and have done for 12 years now, so in a way it is my hometown club. Then there is Tim [Sheens], the first time I spoke to him I was sold straight away really.

“It was always going to take a lot for me to leave Halifax because I had been there for so long, and Widnes was probably the only club I would have left for. I feel like I have a bit of a point to prove at Widnes after how I left last time, so I am quite hungry for the challenge. I’m already back training now trying to get myself ready for it and I want to hit the ground running.

“I’m not just saying this, the Widnes fans are brilliant. I’ve played against them for the last few years and whenever they have come to The Shay, their end has been packed. They are always loud and always give great support, and to be fair they have always been good with me. I’m looking forward to standing in front of them, putting the shirt on and doing my best for them.

“It’s been fantastic to see all the messages from Widnes fans on social media, I have been overwhelmed by it. I didn’t expect anything like that. It has been difficult at the same time because people have been tweeting me and I haven’t been able to say a word to anyone or reply, just throwing out the odd cheeky GIF here and there. It has been nice and I’m looking forward to getting going now.

“I honestly don’t think you will get a better spine in the competition than what Widnes have got. The foundations they have there is already exciting, then you’ve got some real good young kids who have come through. The young lads might be inconsistent at times but now with more older heads at the club, they can help guide the younger lads through that kind of challenge. I think we have put together a decent squad and it’s all coming together nicely.

“I’ve always been the kind of player that doesn’t get excited about going to training and just get excited about playing. Now though, I just can’t wait to get back training to get back in that dressing room environment. The freshness of a new challenge, even though I have already played for Widnes, I am like a kid at Christmas at the minute. I can’t wait for that furlough to end so we can all get back to work.”

Jason Shaw, Founder of Vikings Quids In (VIQI), added, “It is with immense pride that VIQI has once again contributed to a quality new signing for the Vikings, as today the club has announced the resigning of Steve Tyrer.

“Once again, the club is reaping the rewards from the unique scheme that VIQI is. Over the years VIQI has assisted and made possible numerous signings, but in the last 18 months the scheme has undoubtedly become a vital financial support to our great club.

“Hopefully, each and every member of VIQI is aware of how much they are valued by Widnes Vikings and their continued support is at the forefront of our club being able to make the acquisitions of the calibre of Steve Tyrer.

“Once again, thank you for your continued support, and long may it continue in the knowledge that the fans of Widnes Vikings are making it possible to build a team, in these most unprecedented times, to be competitive and bring to the club, passionate and quality players who want to help us achieve great things.”

The signing of Steve Tyrer for the 2021 season was made possible thanks to the continued support of VIQI members.