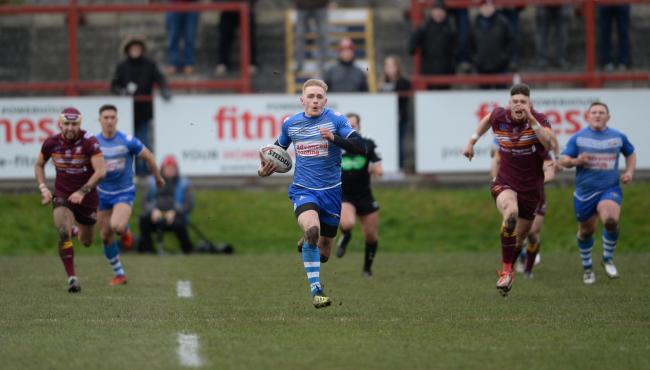 New signing, Jake Spedding, has expressed his excitement at joining Widnes Vikings for the 2020 season.

After putting pen-to-paper on a one year deal at the Halton Stadium, the Vikings media team caught up with Jake to get his thoughts on becoming a Viking…

“I’m delighted to get it all signed and sorted. I can’t wait to get started in pre-season with the boys and help the club in the best way that I can.

What was it about Widnes Vikings that made you want to join the club?

“I think Widnes Vikings speaks for itself, with all the history and tradition that they have. It’s a massive club to come and play for, and I will be very proud to put the black and white jersey on.

“Kieron (Purtill) spoke to me a couple of times and was keen for me to come and join this club, which speaks volumes to me. I played against Widnes twice last year, and having seen them up close, they play a style of rugby under Kieron that will suit my game, so I can’t wait to get going.

You arrive at the club with plenty of Championship experience, how do you think that will help you coming into a new club?

“I’ve been at a few clubs now in the Championship, and I’m starting to get a feel of what is needed to be successful in this division.

You’ve got to do the hard yards and be tough first and foremost, and when you’ve done that, you need to have enough skill and speed to finish off your chances. If we do that, we should get plenty of wins in 2020.”

The club is embarking on a new era in its history, is the rebuild of this club and joining Widnes Vikings at this time something that excites you?

“I’ve already said that Widnes Vikings is a massive club, and I’d love nothing more than to help take this club back to where it belongs.

There’s no doubting that it’s going to be a tough year, as the Championship is always tough, but it’s something that we all should be excited about.

The fans are massively important to our club, you must be looking forward to playing in front of them in 2020?

“I can’t wait to come in and play in front of the fans. Looking in from the outside last year, and seeing what they did in saving this club was incredible and inspiring.

Then to see them rock up in numbers against us twice home and way, then the numbers at the Summer Bash, and then taking so many to Wembley, you could see it helped the team last year in tough, tough moments.

I’m looking forward to being a part of that and getting out there with the boys in front of them.”

With the retentions and signings we’ve made so far, along with many more in the coming days and weeks, is that type of squad one that you’re excited to be a part of?

“I know Jack (Owens) quite well already, and the quality that he brings out the back will be massive for us. Everyone knows how good of a player Danny (Craven) is, and could get in most Super League squads, so it’s huge for us to keep him.

“Then you have Shane (Grady) coming in, who brings massive Championship experience, so we’re getting a squad together that’s capable of doing something and challenging. It’s a tough league, everyone is getting better in it, and we need to do the same if we want to do well.

Lastly, what can Widnes Vikings supporters expect from Jake Spedding in 2020?

“I want to let the fans know that I’ll always give 100% every time I wear the shirt. Hopefully, on the back of that, I can reward them with plenty of tries and some fast, attacking rugby.”

Jake Spedding is proudly sponsored by Comfort & Style Beds for the 2020 season.