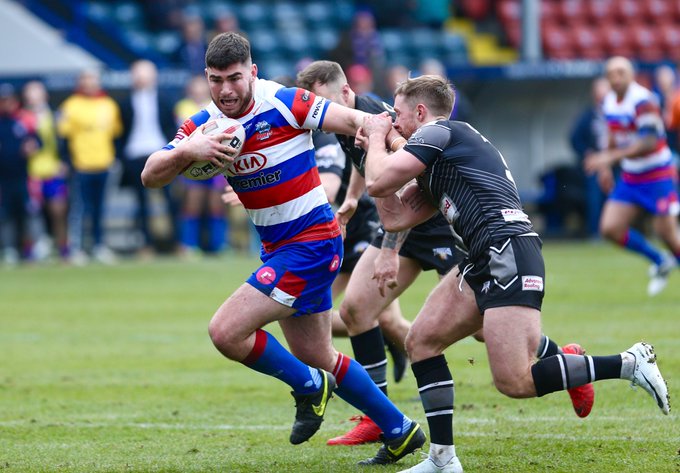 Widnes Vikings are delighted to announce the signing of Pat Moran on a one-year deal, ahead of the 2020 Betfred Championship season.

The former Warrington Wolves front rower joins the Vikings having spent the 2019 season on loan with Sheffield Eagles, with the 21-year-old featuring 12 times and scoring five tries.

He has also enjoyed three spells with Rochdale Hornets on dual registration, making 36 appearances and crossing for two tries across three seasons.

Pat has been named in the Ireland squad for their upcoming 2021 Rugby League World Cup qualifiers, and will be looking to secure a place in the 17 when they face Spain in Valencia this weekend.

Pat Moran commented, “I feel over the moon to sign a contract with Widnes Vikings. It is a fantastic club with a rich history and I just want to get started with pre-season and meet the rest of the team and coaching staff.

“Hopefully I get the opportunity to gain a lot more game time and can gain experience from other players within the squad and the quality coaching staff.

“I’m really looking forward to working under Tim Sheens, he is a coach with plenty of experience and I look forward to learning and developing with him as a player under his management.

“I want to help the team push up and challenge for a top place in the Championship, giving us the best chance to eventually gain promotion, and it would be amazing to be a part of the club’s history. I’m determined to give the fans what they want and get them back into the Super League where Widnes belong.

“I’ve learnt that the Championship is just as tough and competitive as Super League. I’ve gained a lot of knowledge playing within different teams and being exposed to different players, so hopefully I can bring this along with me to Widnes. Being on loan has helped me over the years, any opportunity you get to get on the field is only going to help you develop as a player.

“Leaving Warrington was bitter sweet after six years with the club, and I can’t thank the club enough for what they for done for me. They have developed me from a young age and gave me an opportunity last season to play in Super League. Obviously I want to be playing as much as I can though, and coming to Widnes I’m hoping to get more game time and opportunities.

“I think the team for next year at Widnes is really exciting, with a lot of talented that have great experience at the club, like Danny Craven and Jack Owens. Add the new players to that and they will bring knowledge and experience from playing elsewhere. I can’t wait to see what happens when we all come together.

“Widnes had a tough year and the fans have stuck by the club through thick and thin, helping the team out at the hardest times. I just hope that when I pull on a Widnes shirt I can do the fans justice on the field and give my best performances for them.

“Fans can expect to see a young, enthusiastic forward who gives his all on and off the pitch, I just want to thank Widnes for the opportunity and I can’t wait to get started.”

Pat Moran is proudly sponsored by Polyblend UK for the 2020 Betfred Championship season.