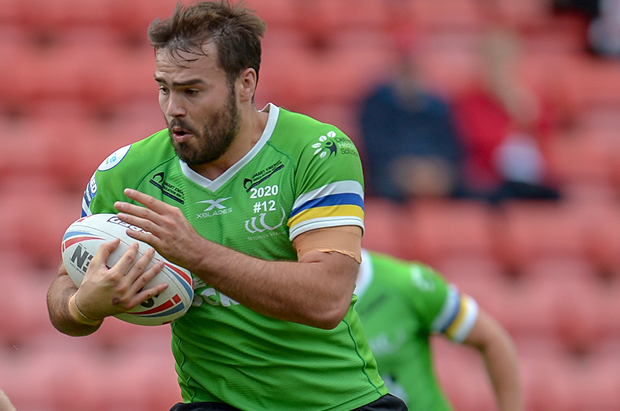 Widnes Vikings signed off their 2019 Betfred Championship campaign with a victory, as they defeated Dewsbury Rams 22-8 at the Tetley’s Stadium and secured an 11th placed finish above their opponents.

It was a special occasion for a number of Widnes players, as Chris Dean marked his final game of rugby league with a try, Dan Norman was inducted into Club 20 and Lewis Else made the step-up from the academy for his First Team debut.

Inside the opening quarter of the contest, chances were few and far between as both sides came up with handling errors each time they ventured into a dangerous position.

Widnes also received a huge blow just 10 minutes in, as Keanan Brand left the field with a concussion and was unable to return, forcing Purtill to reshuffle his side.

The deadlock was finally broken on 20 minutes, as a Rob Worrincy knock on gave the Vikings a chance to attack from a scrum on their opponent’s 40 metre line.

From the resulting set, Sam Wilde poked his nose through the line after collecting a flat pass from Danny Craven, and the back rower managed to find Jack Owens with an offload, before Chris Dean sent Owen Buckley over in the corner.

Just past the half hour mark, the scores were level again as Hep Cahill’s knock on gave the Rams a chance to attack from 35 metres out, and they took full advantage of their field position to score.

Dean had held up Lucas Walshaw initially as the Vikings defence scrambled to keep their line in-tact, before the ball was switched from left to right where Worrincy did enough to touch down before being bundled into touch.

Widnes went short from the kick-off and regathered possession, only for a thundering hit on Wilde forcing the back rower to spill the ball, with the chance going begging.

With three minutes of the half remaining the Vikings did manage to edge back in front though thanks to some individual brilliance from Owens, as he returned a kick the length of the field, throwing a dummy to open up a hole and showing enough pace to score in front of the travelling support.

From the restart, Widnes went short again with their kick-off which led to a knock on from Andy Gabriel, and although Ted Chapelhow was held up over the line the away side couldn’t take advantage of their opportunity.

Within five minutes the Vikings had added to their lead though, with Dean marking his final appearance in the sport with a try as he proved to be too strong from close range, which has been the case on a number of occasions during his brilliant career.

On 51 minutes Widnes were in again, as Craven fired a cut-out ball to Buckley for the wide man to race in and collect his second score of the afternoon.

Dewsbury were down to 12-men three minutes later, as Dale Morton was sin-binned for taking Buckley out off the ball as he attempted to chase down a kick in pursuit of his third try.

Despite the numerical advantage, Widnes conceded moments before the Rams fullback re-entered the field of play, with four offloads leading to an Owen Trout break that had the defence scrambling to haul him down just short. On the next play, Paul Sykes kicked across the field for Worrincy, who beat Anthony Gelling in the air and touched down for his second of the game.

Clever play from Else then gave the Vikings a chance to hit back with just five minutes left on the clock, as his chip early in the set forced Morton to boot the ball into touch and give the visitors a scrum 10 metres from the try line. A penalty followed from the first play, and Owens took the opportunity to add another two points with the boot.

The final notable play of the game saw Owens prevent Sam Day from scoring as he held the hooker up over the line, with the Vikings seeing out the final moments of the game to end their year with a win.