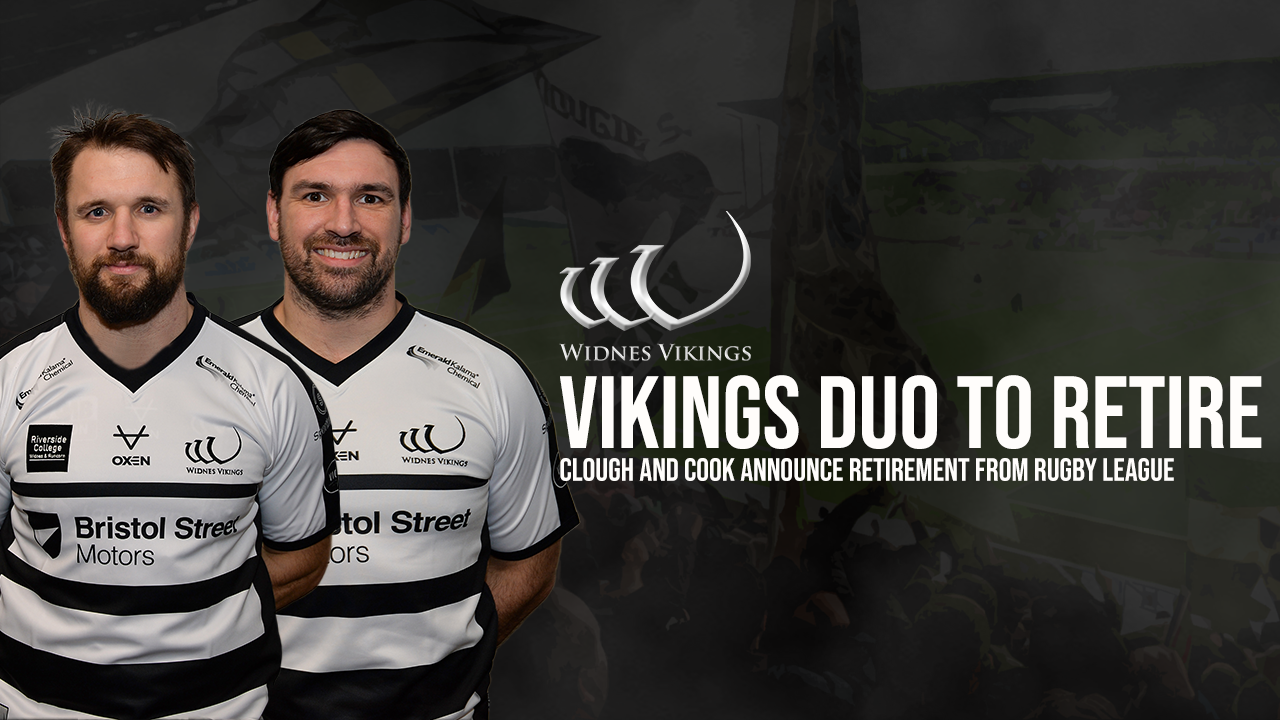 Widnes Vikings can confirm that Paul Clough and Matt Cook will retire from rugby league at the end of the 2021 season.

With a combined 643 games under their belts so far, the pair have opted to call time on their careers at the end of the current campaign, with the Vikings set to face Bradford Bulls this Sunday in their penultimate fixture.

Both players joined Widnes ahead of this season from Super League, however Clough headed to the DCBL Stadium for his second spell in Black and White.

The prop forward spent a brief loan spell with the Vikings back in 2014, and has made 17 appearances so far this season in the Championship on his return.

Back in April he celebrated a huge milestone with a victory at Odsal, as Widnes defeated Bradford 25-12 on his 350thcareer appearance.

Clough’s career began at hometown club St Helens where he made his debut in 2005 and went on to lift the Challenge Cup in back-to-back years in 2007 and 2008, featuring in four Super League Grand Finals too.

The England Knights international spent two seasons with Bradford Bulls before moving to Huddersfield Giants and eventually returning to Widnes in 2021, where he would play out his final season.

Cook’s arrival at Widnes ended a six-year spell with Castleford Tigers, having helped the club win their first ever League Leader’s Shield in 2017, making over 100 appearances in his time at the Jungle.

Also a prop-forward, the news of his signing at the club went down especially well with his father, who was born in Widnes and is a supporter of the Vikings.

With injuries hampering his season, Cook has made 10 appearances, scoring on his second appearance away at Newcastle Thunder, with his career starting at Bradford Bulls where he was part of a title winning side. During his career he also featured for Hull Kingston Rovers and London Broncos.

Widnes Vikings would like to congratulate both Paul and Matt for a great career in the sport and wish them all the best for their future endeavours, as well as thanking them for their efforts this season.

Paul Clough is proudly sponsored by Polyblend UK for the 2021 season.

Matt Cook is proudly sponsored by Skin Deep Aesthetics for the 2021 season.

Both players have penned a statement regarding their retirement which can be found below.

After a 17-year career in the sport and over 350 professional games, the time has come to hang up my boots at the end of this season and retire from Rugby League.

Each year the demands on my body are increasing, and ultimately this has informed my decision to announce my retirement once the 2021 season comes to an end.

I’d like to take this opportunity to thank all of the clubs who have given me the opportunity to realise my dream of making a career from the sport I love. Thanks also to all the coaches I have played under, all of the players I have shared the field with and all of the supporters who have welcomed me at each club I have represented. Thanks also goes to RL Cares for their support during my career and for helping me plan for life after rugby league.

Most importantly though, I would like to take this chance to say thank you to my family who have sacrificed so much to help me achieve everything that I have during my career. Their support and understanding through the ups and downs is what has kept me going.

I’m hoping to end the current season with Widnes Vikings in the best possible way, before enjoying more time with my family.

After 18 years of living out my dream the time has finally come for me to hang up the boots. In my heart I would have loved nothing more than to keep playing, but unfortunately my body is telling me otherwise.

I’d like to take this opportunity to thank all my team mates, coaches, staff, and the supporters for making me feel so welcome during my short time here.

I’d also like to apologise to my team mates and the supporters for not being able to contribute on the field as much as I had hoped this season. On a personal level this was extremely frustrating and disappointing as I never want to let anyone down.

On a positive note, I can say it has been an absolute honour and privilege to have worn the Widnes jersey, and one I know my Dad was extremely proud of with him being a Widnes lad.

I wish everyone involved at the club all the very best for the future and I hope to see the Vikings back up in Super League sometime soon.