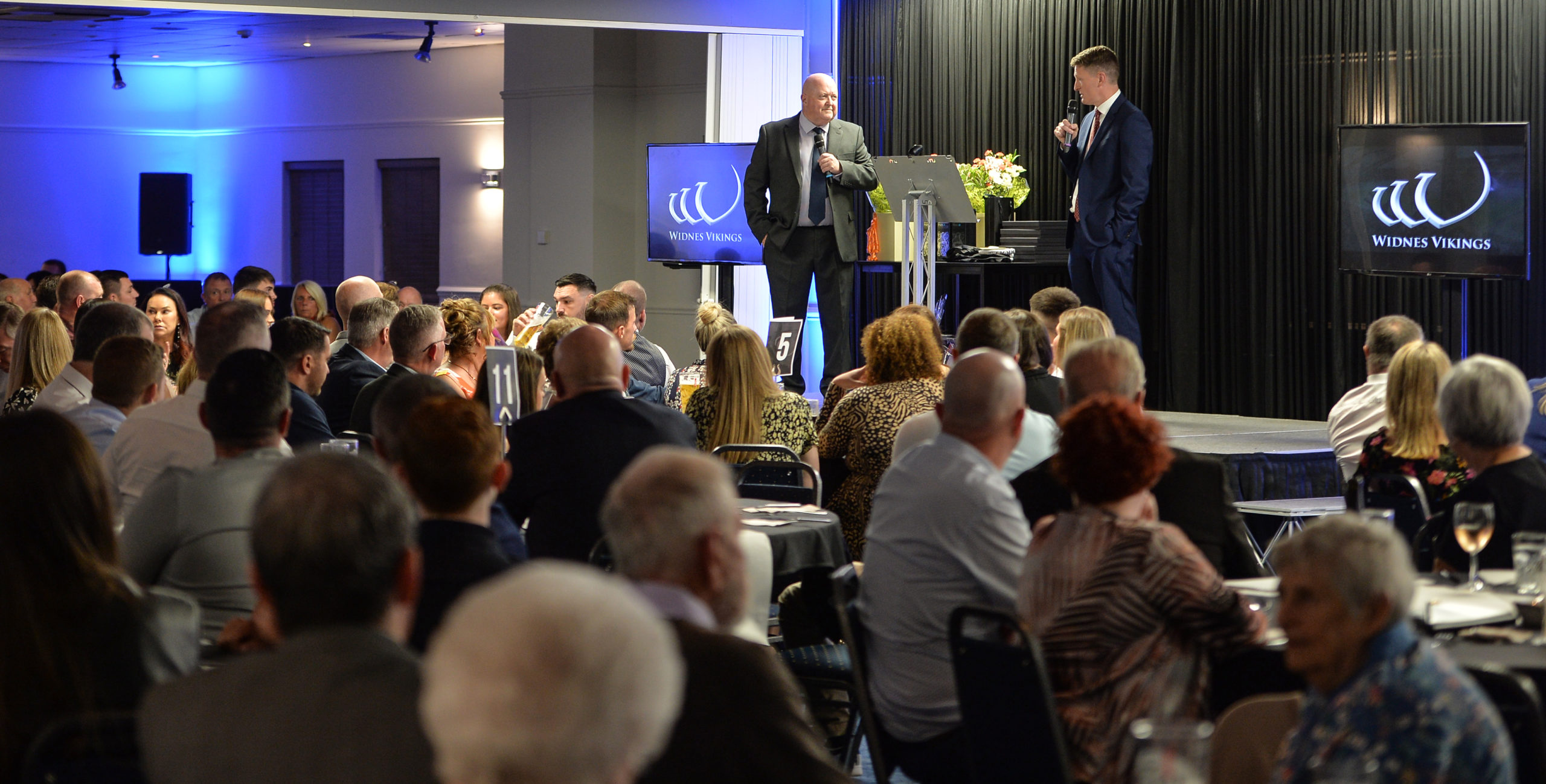 Widnes Vikings held our End of Season Dinner on Thursday evening, with several individuals recognised for their exceptional service to the club this year.

It was an enjoyable evening for all, held in the Bridge Suite of the DCBL Stadium and supported by Halton Borough Council.

Player sponsors and fans joined the players and staff of Widnes Vikings to review the season and celebrate the hard work put in by everyone connected with the club.

Jack then presented awards to Club Shop volunteers to recognise their service to the club, as well as Widnes Vikings Women’s Hannah Cleaver whose side are currently top of the Women’s Championship, and also to senior figures from the club’s Learning Disability Rugby League side. Volunteers Neil Belshaw, Kellen Wood and Lauren Garner were also called to the stage to recognise their service.

Tributes were also paid to Matt Cook and Paul Clough, who recently announced that they will be retiring from the game following Sunday’s game at Swinton Lions following extremely successful careers.

The players’ awards began with a double scoop for Deon Cross, who came away with both Fans’ Player of the Season and Try of the Season for his effort against London Broncos. Deon is one of the league’s leading try scorers and has 17 tries in all competitions so far this season. He was joined on stage to receive the award by his sponsors, Jeannie’s Away Travel. The Fans’ award was presented by Debbie Markey.

Simon Finnigan took to the stage next, and gave an honest assessment of the season so far before presenting his Coach’s Player of the Year award for 2021. He chose Kenny Baker for the accolade, who was joined on stage by his sponsor, West End Motors. Kenny has scored six tries so far this season and always wears his heart on his sleeve and gives his all for the Vikings.

Assistant Coach Ryan O’Brien took to the stage next to tell his Widnes Vikings story so far, progressing from youth player up to his current role, before presenting the Young Player of the Year award. Will Tilleke was the winner, joined by his sponsors, LB Brickwork Ltd. Will has had an impressive debut season with the first team and has had to play much more than first expected due to injuries in his position, but has flourished as a result and already has a couple of tries to his name.

The penultimate award to be handed out was the Players’ Player of the Year award, and Ste Tyrer was chosen by his teammates to receive the accolade after scoring 15 tries so far this season. He joined his sponsors, The Johnson Family (For Frank) onstage to take the prize.

The final award of the night was the Chairman’s Award. Chairman Chris Price took to the stage to name his recipient, with club photographer Steve Jones of RL Pix taking the prize for his exceptional service to the club. Chris talked of how Steve had rejected offers from Super League clubs to stay connected to his hometown club, Widnes, and applauded Steve for his excellent capture of Jack Owens’ celebration after scoring a penalty goal to beat Bradford Bulls at home the previous week.

Try of the Season: Deon Cross (vs London Broncos (H), sponsored by Jeannie’s Away Travel

Fans’ Player of the Year: Deon Cross, sponsored by Jeannie’s Away Travel

Young Player of the Year: Will Tilleke, sponsored by LB Brickwork Ltd

Players’ Player of the Year: Ste Tyrer, sponsored by The Johnson Family (For Frank)

Widnes Vikings would like to thank all fans, volunteers, player sponsors and staff for their efforts this season.