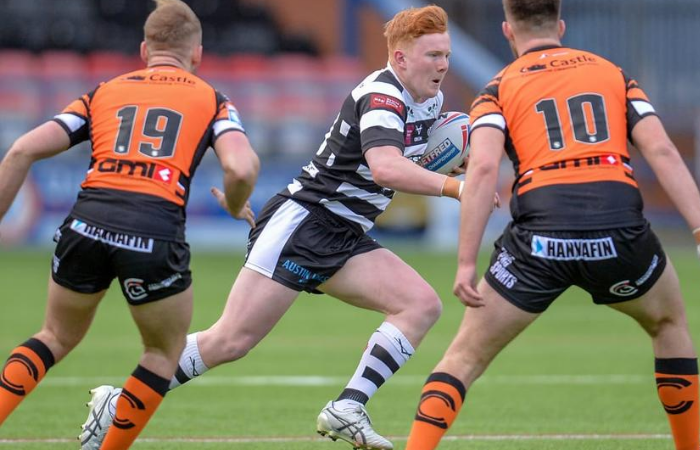 Widnes Vikings are delighted to announce that Calum O’Neill has signed a new one-year deal with the club ahead of the 2021 season.

The 20-year-old is a product of the club’s Academy, having joined the Scholarship Programme at the age of 14 from local community club Halton Farnworth Hornets.

After becoming a standout figure in the Vikings Academy side, Calum stepped up to the First Team when making his debut during the 2019 season at home to Leigh Centurions.

A memorable afternoon was topped off when the youngster burst through the Centurions defence to mark his first senior appearance with a try, scoring in front of his family in the South Stand.

His performances that season in the Academy side led to the prop forward signing a First Team deal for the 2020 campaign.

In 2020, the youngster was a prominent figure in the Reserves as he featured in four of the five fixtures played before the cancellation of the season.

Calum also appeared in two of the First Team’s pre-season fixtures against Rochdale Hornets and Castleford Tigers, and will be looking to become a regular in Tim Sheens’ squad for the 2021 season.

The forward is an Ireland international at U16 and U19 levels, and has been a part of the train-on squad for the senior international side at both the European Championships and World Cup qualifying campaign.

“The experience of making my debut in 2019 was something I’ll never forget, and now I am keen to hit the ground running for the new season once it is safe to do so.

“I’m looking forward to a big year in 2021, where my aim is to prove myself to the fans and show that I deserve a regular spot in the First Team.

“Tim Sheens was a big reason behind me signing another deal here at Widnes, I’ve really enjoyed working with him since he arrived, and I am hoping to have a full season of playing under him to look forward to.”

Calum O’Neill is sponsored by Emerald Kalama for the 2020 season.