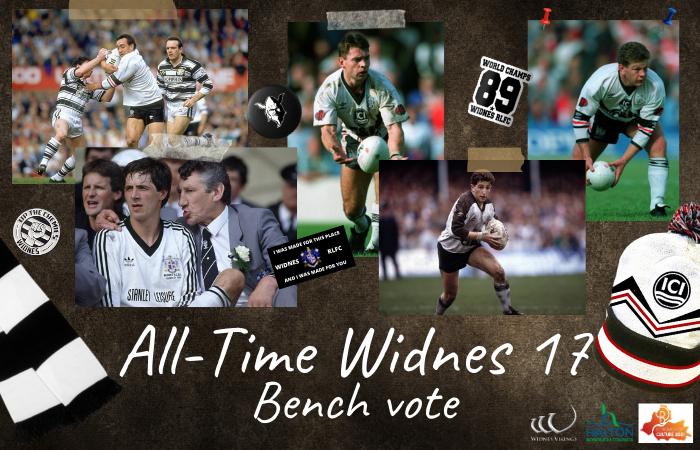 This week marks the final All-time Widnes 17 vote, as we ask supporters to vote for the four players who will appear on the bench.

The initiative in partnership with Halton Borough Council has seen fans vote for the starting 13 and a head coach so far, with the last four places now up for grabs.

Each week supporters have been voting on a different position, as well as a Head Coach, which will culminate in the Executive Boxes at the DCBL Stadium being renamed and redecorated to honour the 18 chosen by you.

Following the end of all of the positional votes, the 10 players with the most votes who haven’t made the team have now been shortlisted for the bench vote.

Supporters will be asked to pick four of the 10 players they would like to see included in the All-time Widnes 17, with the full voting results of all positions being revealed next week.

The four players with the most votes in this weeks shortlist will see Boxes 14-17 renamed and redecorated in their honour as a tribute to all they have done for the club, town and borough.

We have emailed the vote to our database, and we have also included a link below in order to access the vote and select the four players to make up the bench for the All-time Widnes 17.

CLICK HERE TO VOTE FOR YOUR BENCH
0Shares
PrevNext